Witch’s Brew is a magic-themed slot by Realtime Gaming. The game offers you two Wild symbols and up to 125 free spins. Read more in this review.

Witches and magic are one of the most common themes in popular culture. It is no surprise, then, that this sub-genre of the supernatural is an inspiration among fan-favorite Bitcoin slots.

One of the titles featuring the beloved witch is Realtime Gaming’s Witch’s Brew. This 5×3-grid slot game offers not only enchanting graphics but also special features such as free spins, Wilds, and re-spins. The best part is that this slot is available in casinos accepting US players. But before you spin the reels of Witch’s Brew, know more about the game by reading this review.

You will notice that Witch’s Brew concept is straightforward: a witch is in a spooky basement, brewing her next concoction. Still, the design of the slot is detailed, making it one of the most visually stunning games from Realtime Gaming. In addition, the soundtrack is spooky enough to give you chills, but not too much to scare you off from spinning the reels.

The symbols of the game are potion ingredients and elements you would associate with witchcraft. The highest-paying icon is the Root, which pays at most 5,000 coins. Meanwhile, you will also encounter an old wizard, a black cat, and a toad. Meanwhile, everything related to potion-brewing—cauldrons, ingredients, mortars and pestles—will pay you small coin prizes. 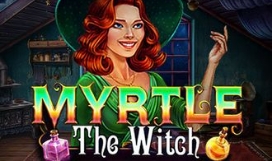 Witch’s Brew is a game that gives you 25 ways to win out of matching symbols formed from left to right. You can place wagers between 0.25 to 125 coins on the title’s 5×3-grid slot. There is no Max Bet button, so you have to adjust your bet manually.

If you want to spin the reels hands-free, you can turn on the slot’s Auto Play feature. This spins the reels for an unlimited number of rounds. You can also adjust the speed of the reels using the Speed button. This makes your reel spins faster than usual.

The game offers three features that include Wilds, free spins, and re-spins. Read more about these bonuses below.

There are two Wild icons on Witch’s Brew, both of which appear only on Reels 2, 3, and 4. One is the Dragon Fang, which substitutes for all other symbols except the Scatter. On the other hand, the Witch herself has the same function. The only difference is that she doubles your wins from matching icons.

When the same Wild symbol appears on Reels 2, 3, and 4, these icons will stick while the rest of the reels spin up to 10 times. Doing so increases your chances of landing winning combinations without spending on the re-spins.

The Goblin Blood symbol serves as the Scatter, activating free spins when three to five of them appear on the reels. Getting three Scatters will reward you with 10 free spins. Meanwhile, four or five Goblin Blood icons will give you 25 or 125 free rounds, respectively. During these free spins, Wilds will appear as a group on the reels, giving you more chances to trigger wins. Plus, this feature doubles the amount on your rewards.

The 5,000-coin prize on the regular game might be small, but at least the bonuses on Witch’s Brew give you a chance to win more than that amount. Plus, you can win up to 125 free spins, which means you can play longer without staking your bitcoins.

Should you play Witch’s Brew Slot

The magic-themed Witch’s Brew is one of Realtime Gaming’s best slots to date. Apart from the stunning visuals, the game draws your attention with its bonuses. It may not have as many special features as other slot games, but the two Wild symbols, re-spins, and free spins are enough if you are a casual gamer. The best part is that you can make 125 spins for free, especially if you get five Scatter symbols on the reels. So if it is free spins you are after, Witch’s Brew is a slot you must play.