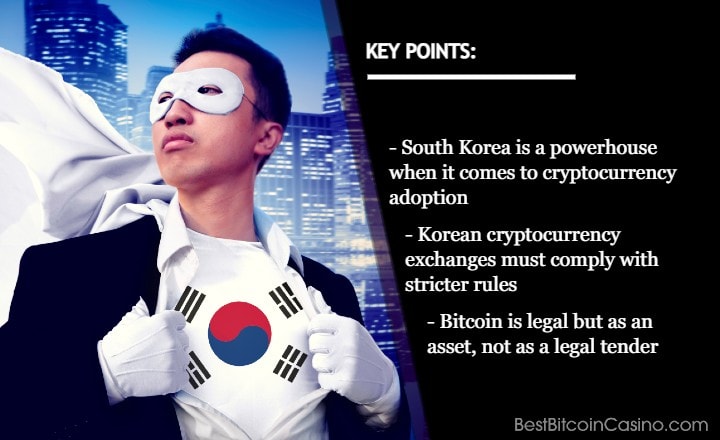 South Korea had been exposed to the concept of and even the actual usage of digital tokens long before Bitcoin became a household name. People were exchanging in-game credits to real money and using microtransactions over a decade ahead of the birth of cryptocurrency. And this explains how South Koreans didn’t bat a single eye when Satoshi Nakamoto introduced the Bitcoin whitepaper in 2008.

But it took a few more years until 2017 before the Bitcoin hype started to gain ground in South Korea. By then, more people, powered by the millennials, had invested in Bitcoin, also partly because of the 9.8-percent youth unemployment rate in the country at that time.

It was also in that year when the government made Bitcoin legal in South Korea not as a legal tender but as a remittance method applicable for financial institutions. Moreover, the government greenlit local Korean cryptocurrency exchanges to operate under the supervision of the Korean Financial Services Commission (FSC).

The Bitcoin hype in the country, along with the rising popularity of Ethereum three to four years ago, had forced the government to enforce stricter implementations of the KYC and AML policies. For instance, minors, government employees, and foreigners cannot use Korean cryptocurrency exchanges.

The said crypto bill, which would take effect in March 2021, cryptocurrency exchanges must complete the regulatory requirements laid out by the Financial Intelligence Unit (FIU) under the FSC before September 24 this year.

These requirements include the complete compliance of exchanges to constantly flag and inform the unit of suspicious transactions taking place on their platforms within three working days. All reports submitted to the FIU must include the transactions’ values in Korean won.

Additionally, the FIU requires all exchanges to delist from the platform all privacy coins, including Monero (XMR), Bytecoin (BCN), and ZCash (ZEC), among others.

But even before the implementation of the new crypto bill, the South Korean government has been actively monitoring cryptocurrency trading in the country. In fact, the National Tax Service last month conducted an investigation and audit on Korea Digital Exchange, a Korean cryptocurrency exchange operated by Flybit.

Flybit, initially named Dexko until April 2020, had to submit all data and transaction details from 2017 to 2019 for the National Tax Service to check for any signs of transaction anomalies or tax evasion.

This incident was not the first time because South Korea’s National Tax Service had also conducted a special audit of exchanges Coinone and Bithumb back in 2018. The Bithumb exchange, in the end, received a $69 million tax bill, which the company called groundless.

On another note, reports state that the Ministry of Economy and Finance targets full implementation of the crypto tax policy on January 1, 2022. With this, the government could levy 20 percent on capital gains derived from cryptocurrency trading in the country.

During the bear market in 2018, Ethereum trading remained stable. And with the major comeback of Bitcoin as of late, with the Bitcoin price in Korea currently at over 55 million KOR, it is only evident that Bitcoin will be difficult to top as the leader of all South Korean cryptocurrency coins.

But it was not too long ago when the government actually dreamed of creating its own coin. In 2018, the country’s capital Seoul initiated the conception of S-Coin, envisioned to become a payment method to be used in paying for subway fares and for welfare programs funded by the city.

And what started from a vision will soon become a reality as Seoul will reportedly launch its S-Coin this year. This would mark the city’s plan to make Seoul a smart city by 2022, one that uses both cryptocurrency and blockchain technology.

Cryptocurrency in iGaming in South Korea

Gambling in South Korea is illegal except for the selected land-based casino which by the way is open only to foreigners. And when it comes to online gambling, the government is even more strict, completely preventing local residents from engaging in online gambling activities, such as when you bet on sports or play poker.

While players can still access offshore online casinos in South Korea, they are better off using cryptocurrency, which the government recognizes as an asset rather than a legal tender. With this, players can access Bitcoin casino sites based and licensed elsewhere, allowing them to explore provably fair games, experience blockchain betting, and benefit from fast, anonymous transactions. They can play in a licensed offshore casino accepting ZEC, BCH, USDT, and other cryptocurrencies. This way, players can experience online gambling entertainment paired with the wonders of cryptocurrencies.

If you’re interested in getting an updated 2021 list of all Bitcoin casino reviews for this market, check out the casino review section.