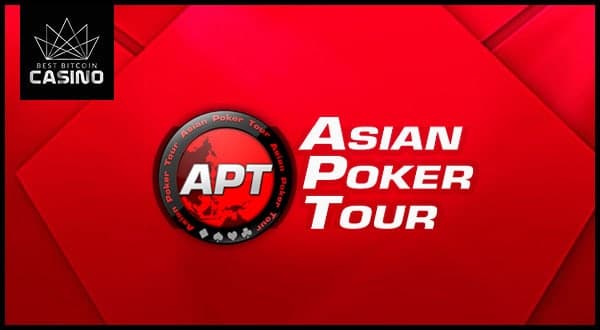 Avid fans of Asian Poker Tour will have plenty to look forward to next year. The tour will start the year in Vietnam and will end in Macau in November.

The Asian Poker Tour 2018 schedule has been set for next year. There are seven live poker tournament events to look forward to next year.

The first APT tour will be on Vietnam in January. The end of the tour will take place in Macau in November as the grand final tournament.

APT Schedule in First Half of 2018 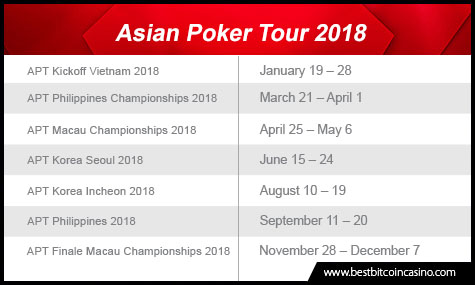 Poker players can test their skills next year in different countries for Asian Poker Tour 2018. The first tournament to check out is in Vietnam happening next month. A tour in the Philippines and Macau follows in March and April, with a Seoul tournament set to close the first half of the annual tour.

The Macau event of the tour is set on April 25. It will be at the Macau Billionaire Poker venue which is inside the Babylon Casino in Macau. The APT Macau 2018 Main Event is split across April 28 to May 2. The APT Championships Macau starts on May 2 until May 6. The main Event still allows re-entry before round 7. The exception to this rule is Day 1B which allows qualifying players to re-enter on Day 2.

Korea’s APT event will be at the Paradise Casino at Grand Walkerhill Seoul in South Korea. While the APT has been hosting the event in South Korea for years, year 2018 will be the first time that it is held in the capital city. The tour is thanks to a partnership with Geuterbruck Korea, Inc.

APT Schedule in Second Half of 2018

Bitcoin poker players looking for real-life poker action should head over to Korea, the Philippines, and Macau for the three final tours next year. Taking a break for over a month, APT 2018 will resume in August in Incheon and will be followed in September in the Philippines once again. The Grand Finale of APT 2018 is set in Macau and is scheduled in late November up to early December.

The APT comes back to Korea in Incheon at Paradise City on Aug. 10. Paradise City is near the Incheon Airport complex. The location is expected to bring in a large number of visitors and tourists who like to play a quick hand of poker before their flight.

The Grand Finale of the tour will be held in the Gambling Mecca of Asia. The tour returns to the Macau Billionaire Poker inside Babylon Casino. The list of events and schedule will be announced next year.

| Read More: Play and Have the Wonders of Bitcoin Poker!