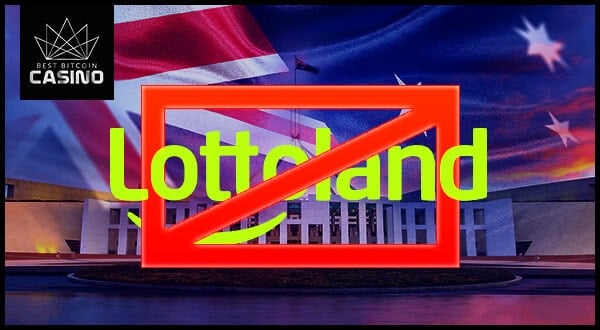 The Australian Federal Government has legislated a prohibition of synthetic lotteries, including Lottoland, despite concerns of a growing Tabcorp monopoly.

Effective January 1, 2019, lottery bettors in Australia can no longer bet through synthetic lotteries such as Lottoland.

This is following legislation signed by the government on June 28, formally banning websites that accept bets on the outcome of lottery draws. Local news outlets reported that the government and the Australian Labor Party teamed up to crack down on synthetic lotteries following concerns by traditional lotto outlets losing clients and revenue to online lotto betting sites.

Online lotto betting offers the same gameplay as a traditional lottery in picking a set of winning numbers. Punters will bet on what numbers will appear on a chosen physical lotto draw anywhere in the world. However, since the transaction happens online, lotto bettors do not receive physical lotto tickets. In addition, lotto-betting sites are not connected to physical lotteries. This means that prize winnings would come from the online sites themselves.

One of the sites affected by the ban is Lottoland, the biggest online lotto betting site in the country. Based in Gibraltar, the betting site currently offers 26 overseas lotto and keno draws such as US Powerball, Megamillions, and Eurojackpot.

Despite the ban, Lottoland claimed it will remain in business on the continent. The company’s Australian Division has shared that it has already planned offering wagering options beyond lotto betting to more than 700,00 Aussie punters.

“We are here to stay. We will continue to innovate and adapt so that we can continue to provide our customers with the type of exciting and innovative products they have come to expect from us over the past two years.”

No Benefit to Aussies

Earlier, Australian Communications Minister Mitch Fifield argued that a crackdown on synthetic lotteries would help small betting companies. According to him, lotto-betting companies offer nothing to the Aussie community since they are not compelled to pay taxes.

Meanwhile, the Australian Lottery and Newsagents Association (ALNA) welcomed the legislation. The group shares the same sentiment with Fifield, adding that online lotto betting sites offer minimal to no protection to problem gamblers and high-risk spenders.

“This will protect Australia from synthetic lotteries and will bring important new consumer protections by closing the loophole that lotto betting sites have been operating out of. We now call on all synthetic lottery operators to do the right thing by Australians and cease offering these products immediately.”

Lottoland defended itself, pointing out that its site does not offer betting on any Aussie lottery, which means it does not compete directly with local newsagents and lottery outlets. Brill also shared that, on the contrary, the company wants to cooperate with newsagents to provide Aussie punters with better lotto-related services that could be mutually beneficial to both parties.

Meanwhile, Lottoland accused Tabcorp—an Australian wagering, gaming, and keno operator—of being monopolistic concerning the synthetic lottery ban. The former claimed that the latter was behind the movement to ban online lottery betting in order to keep the Australian lotto space for themselves.

Brill, added that the prohibition would hamper competition and innovation in the lottery sector. He added that the ban would have unintended consequences to the Australian punting community.

On the other hand, Tabcorp claimed that the push for a ban was not for its own interests. It argued that lotteries should focus not only on generating profit for themselves but also for providing revenue to the local community. The company asserted that the move to ban was due to Lottoland’s failure to serve the community.

“The Victorian lottery delivers over US$400 million for the funding of hospitals, and over US$100 million to venues, the newsagents and convenience stores that sell lottery tickets, and that’s what the lottery is about… Lottoland paid zero tax and actually gave nothing back to the Victorian community at all.”

Despite the government legislating the ban, Lottoland vows to challenge the decision in the High Court of Australia. News outlets have reported that the company had engaged with multinational law firm Baker McKenzie, the second largest in the world.

“With 700,000 customers in Australia, we’re going to continue to fight like this. I’, ever the optimist, and we are still swinging, still punching… but we are really up against it. [Lottoland] is a big business here in Australia and globally, so it’s got huge strategic importance to us. We’ll look at every possible avenue.”

In its fight, Lottoland will have some support. While the bill garnered an overwhelming bipartisan approval in the Senate, one independent senator managed to raise his voice of displeasure. David Leyonhjelm condemned the ban, pointing out that the government should not close down business, but rather encourage more to invest in the Australian market. The senator added that the ban would hinder progress and innovation in the Aussie lottery industry.

The legal challenge of the online lotto-betting company will most likely have the backing of the Newsagents Association of NSW & ACT (NANA). After all, the group continuously criticized the ban that—according to them—would give Tabcorp total monopoly of the lottery sector in the country.

Until Lottoland formally questions the legislation in the country’s supreme court, Australian bettors only have six months to win lottery and keno jackpots through its online lottery-betting offers.