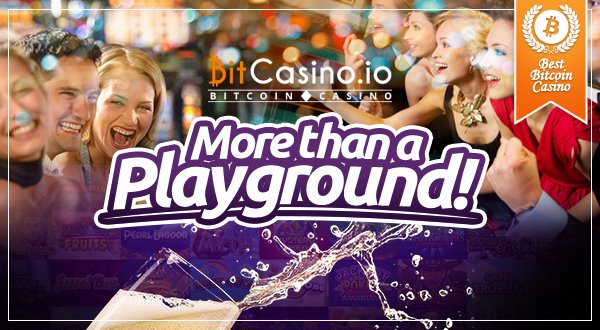 Bitcasino.io is merely more than a hub for Bitcoin casino bettors; it’s also a great site for new adopters to gain knowledge about Bitcoin in general.

A few weeks ago, I asked the folks over at Bitcasino.io if I could try out their website, and they gladly accepted. They gave me test funds (I wasn’t able to withdraw any funds) and I went over to the site.

I felt as if I had landed in a playground. Initially, I was amazed at the number of Bitcoin casino games they had available. I thought to myself: “is this real?” The gaming platform was colorful. For some games, I can hear people in the room speaking to me and I felt like I was in a real casino. There are many games to choose from, and I was surprised that they all had great graphics.

One of my favorite parts was the Christmas games. Like most Americans, it’s my favorite holiday. After what I thought was only 10 minutes of Holiday goodness had passed, an hour had gone by. But my test funds were still in the positive. I made a virtual killing.

I played Golden Ticket next. This Carnival-like experience actually has realistic sound effects and distinct theme music that make you think you’re in a carnival. The game works like a slot machine; you’re able to adjust the bets to whatever you want. If you listen closely, you’ll hear bells, voices, and merchants in the background. This small detail made a big difference in my playing experience. When I muted it, it wasn’t the same.

When it was time for me to play Blackjack, my experience got serious.  It was no carnival, and I treated it just like a real game. I didn’t play too well. But that was my fault, not the game’s. I was convinced I was in Vegas again.

However, one thing that really impressed me about the website is Bitcasino’s “Bitcoin Information” tab. I am of the unique opinion that they explained Bitcoin better than most websites on the Internet. It is very responsible of any website to do so, let alone one designed for Bitcoin gambling.

Below, I have included some excerpts from the Information page.

One of the major advantages to using bitcoin as a method of payment is that the fees are substantially cheaper than what you would expect from a bank transfer or online payment system like PayPal. Why should you pay a fee for moving your hard earned money?

Bitcoin trumps the entire market when it comes to competing on fees. This isn’t to say that bitcoin transfers are free of charge as merchants may choose to levy an admin fee on their customers, but you’ll be looking at a few cents and no where near the $50 fee that you might see when using a bank.

Modern history has shown a number of examples where central banks and human involvement have turned economies upside down over the course of a few years. In March 2013, Cypriots who had uninsured savings accounts larger than $100,000 were seized by the Central Bank to offset their own economic crisis. This type of aggressive economic policy is a result of central banks and individuals being unable to take full control of what is rightfully theirs – the money that you have in your bank may well be safe for now, but it is never truly your own.

Bitcoin is different. What happened in Cyprus could not be repeated if those savings accounts were stored in bitcoin. Bitcoin is owned by the people and it is maintained for the people with no strings attached.

Their explanation was so good, that I began sending people who wanted to learn about Bitcoin the link on this website. One page with four tabs will provide anyone with the baseline knowledge they need to understand this new form of currency.  If you know anything about Bitcoin, you know that this is no easy feat.

If Bitcoin casinos and gambling sites are to gain more legitimacy, they should follow what Bitcasino.io is accomplishing in the Bitcoin space. I got the impression that they were truly aiming to educate their users on top of the fact that they continue to shape the online betting arena with their improved casino games and services.

Overall, I had a pleasant experience on the website and would recommend anyone with extra satoshis and some time on their hands to check it out.