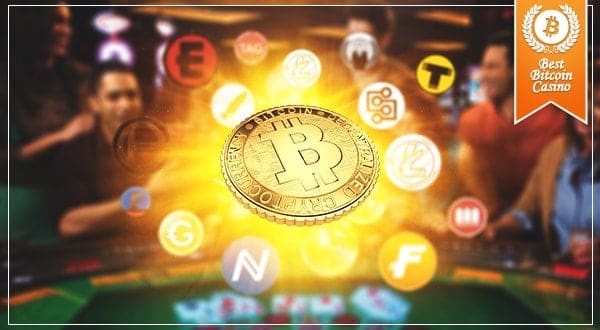 Cryptocurrency gambling is more than just Bitcoin. There are other alternative coins out there and gamblers should consider their options.

When people think of cryptocurrency gambling, Bitcoin is what immediately comes into their mind. As the world’s preeminent cryptocurrency, Bitcoin is the leading one being used. It is not the only choice, though. When Satoshi Nakamoto released his white paper on Bitcoin in 2009, he also released the details of how Bitcoin operates. This meant that anyone could copy it and add their tweaks to the system. This allowed people to modify and create their own version of Bitcoin.

This was exactly what happened a year later, when some of the first alternative coins started popping up. One of the more notable ones that appeared was Litecoin, which quickly became a dominant alternative to Bitcoin. The silver to Bitcoin’s gold, Litecoin has successfully managed to reach a market cap of around $66 million. This is small potatoes compared to Bitcoin’s $6 billion, but it is still a lot of money. Other than Litecoin, there are hundreds of other altcoins out there.

Just like Bitcoin, Litecoin and other altcoins are quite useful for gambling purposes. All of these cryptocurrencies share the same features of providing anonymity, speedy transactions, and reliability. There are certain noticeable differences, though. Here is a quick comparison that would be useful for online gamblers thinking of using a cryptocurrency to wager.

Bitcoin gambling is the more popular option, and this is evident with the rise of Bitcoin games. Gamblers can use it on a lot of gambling websites, and people have become increasingly accepting of it, using it as their means of wagering on Bitcoin slots and other game content on board.

Increased market penetration also means that the support infrastructure behind Bitcoin is robust. Bitcoin gamblers can expect a wide range of apps and services open to them to ensure their transactions are all safe and secure.

On the other hand, gambling with altcoins provide gamblers with a lot more stability. One of Bitcoin’s defining features is the fact that its price can rise and drop like feather in a moment’s notice. This is not good for those who want consistency in their bankrolls. Smaller cryptocurrencies may not be as popular, but they tend to be a lot more stable when it comes to their price.

Another positive trait of altcoins is that each has their own special features. For example, Litecoin uses scrypt instead of the Bitcoin’s SHA-256 as a hash, which can make it more secure. Depending on what features an altcoin has, players may have access to elements like sidechains or stealth addresses.

The best of both worlds

Fortunately, there are some casinos that make choosing between altcoins and Bitcoin unnecessary. Sites like FortuneJack and Fun-Casino are just two examples of gambling sites that have started to accept cryptocurrencies other than Bitcoin. These two casinos have a wide range of betting options and offer great bonuses. The two sites are one of the leading choices for many people looking for altcoin gambling.

With further market penetration by altcoins and Bitcoin into the market, the public can expect other sites to follow their lead. This will not only make Bitcoin gambling more popular, but it will provide online players with more choices and opportunities to double the fun and rewards with cryptocurrency gambling.