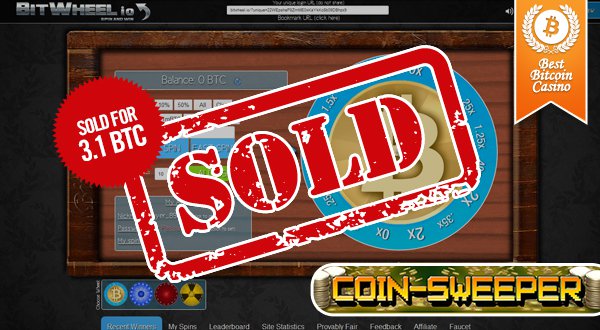 A Bitcoin minesweeper gaming platform welcomes its new brother, the wheel of fortune-inspired site Bitwheel.io, after the operators of the latter had put the platform up for an auction on Bitcointalk.org.

Announced in the official forum thread of Bitwheel.io on Oct. 27, the transfer of the site to the highest bidder was finalized, naming Retro Coin Games as the new owners to manage the said brand.

Retro Coin Games, however, may not be a familiar name in the Bitcoin casino market, but it is a small team responsible for developing and operating Bitcoin gambling games. It currently handles its first release, Coin Sweeper, and admitted that they, as a team, closely follow the Bitcoin wheel of fortune game.

“We have watched BitWheel.io for a few months now, and we are big fans of the site! So naturally when it became available we were very excited about the opportunity to purchase it.”

Coin Games won the deal, earning them the right to modify the platform to their preferences.

According to the statement, exciting ideas are already on their way to improve Bitwheel.io. Specific mentions include a lower house edge, an increased maximum bet amount, and a larger Bitcoin faucet.

While the team lauded the smooth sale and prompt transfer of the site, it pointed out in another thread the attempt made by a scammer to grab hold of the 3.1 BTC payment.

In the screenshot posted by Retro Coin Games on Bitcointalk, a user disguised as the Bitwheel.io creator sent a message, asking for the payment to be sent to the provided Bitcoin wallet address.

Fortunately, the highest bidder did not fall victim to the said scam attempt.

Meanwhile, the makers of Coin Sweeper are open for the free Bitcoin casino players’ suggestions on how to improve the gameplay or which features should be added. Likewise, existing affiliates of the sold brand are encouraged to contact them for queries.