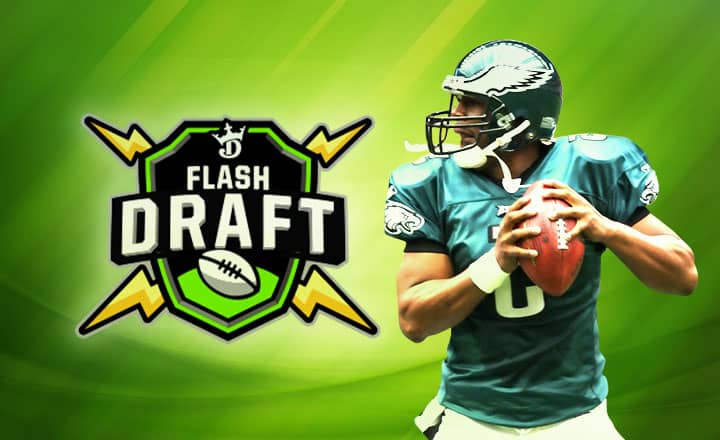 Avid fans of American football now have another way of earning money while watching US’ favorite sport. Daily fantasy sports company DraftKings has announced Flash Draft, its newest game for the 99th season of the National Football League (NFL).

Owing to its name, Flash Draft allows players to draft different betting options in just a short amount of time. Viewers can participate in Flash Draft’s contests in between quarters of live NFL games. Flash Draft will cover the second, third, and fourth quarter of each NFL game, as well as the match’s second half.

Each Flash Draft contests will require participants to guess which NFL professional will score the most fantasy points in a given quarter or half. A draft will consist of five rounds in which players must choose in less than 15 seconds who among the three football stars listed will earn the most fantasy points.

Fans and viewers interested in Flash Draft can access the game exclusively through DraftKings’ mobile application. The daily fantasy sports company is yet to announce the scheduled start of its new game. However, DraftKings indicated that Flash Draft will arrive in the middle of the upcoming NFL season.

Who Will Win the Super Bowl?

Bettors who could not wait for the NFL’s midseason can place their wagers on several outright odds in different online casinos.

Arguably one of the best American football teams ever assembled, the Patriots are already considered the team to beat this early into the season. Both online sportsbooks bet365 and William Hill priced the odds of the Patriots winning the Super Bowl LIII at 5/1.

Odds also suggest that Patriots’ closest contender will be the team who beat them to the trophy last year, the Philadelphia Eagles. Even with odds against the National Football Conference East division club, the Eagles still defeated the New England club 41 to 33 and won their first-ever Super Bowl at the championship game’s 52nd iteration.

With last season’s Super Bowl MVP quarterback Nick Foles and returning star Carson Wentz, the Philly club hopes to overcome the odds once more and to win its second-straight championship. Both bet365 and William Hill have the Philadelphia Eagles winning at the end of the season at 9/1.

The 2018-2019 NFL season will feature some of the greatest American football superstars in the world. Fans can catch the season’s first game on September 6 with Atlanta Falcons visiting champions Philadelphia Eagles.