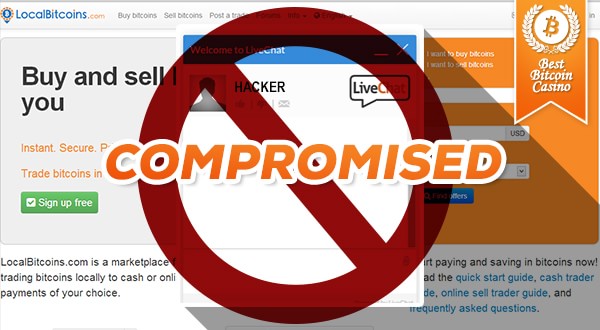 What should assist users turns out to be the source of problems, as evident in the recent fiasco that happened on LocalBitcoins. Bitcoin casino players, beware.

The security of the Bitcoin platforms continue to receive flaks as another trading marketplace has succumbed to hacking attempts, compromising user accounts and stealing bitcoins.

LocalBitcoins, known as a website for the buying and selling of the digital currency within the local communities, became the subject of hot talks after its customer support live chat served as the medium for unknown hackers to compromise some accounts.

According to the official statement posted by Nikolaus on the LocalBitcoins forum, the hacker provided links within the chat for the users to click and unknowingly download executable files.

Users who clicked on the links or downloaded the files through the chat support are likely to have become victims of the attack. 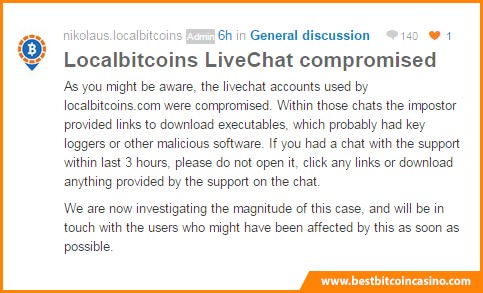 He added that those who had contacted the support team via the chat feature within the last three hours the message was posted are better off ignoring anything that is included in the log.

Meanwhile, LocalBitcoins customers who were unfortunate to have been using the live chat during that time already received an email notifying them of the situation as well as the steps needed to be taken to prevent further damages.

They are advised to reinstall their OS on their computer and to reset the password for the LocalBitcoins and email accounts. Likewise, two-factor authentication must be activated as an extra layer of protection.

Regarding the stolen bitcoins, however, the trading platform promises to have the amounts refunded, provided that the account has been proven to have been compromised due to the said attack.

For instance, in the event the user has an account in a Bitcoin exchange or in a Bitcoin casino, chances are the balances on those accounts may also be exposed to online theft.

This is one reason gamblers who enjoy betting on the Bitcoin games must also ensure that they assign different passwords for each of their accounts on the web. In addition, enabling the two-factor authentication system is a smart move to ensure security on the web.