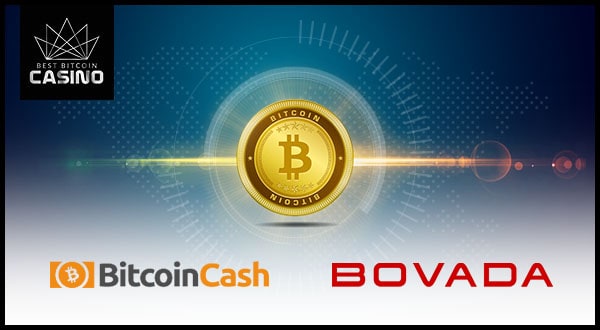 Bovada embraces the latest Bitcoin altcoin, Bitcoin Cash. This option can encourage bettors to use BCH because if its benefits compared with BTC.

Bovada now offers Bitcoin Cash (BCH) as one of its deposit options, becoming the latest online casino, sportsbook, and poker room to embrace the altcoin.

With Bitcoin Cash onboard Bovada, cryptocurrency players now have an alternative to Bitcoin when it comes to funding their account. This development marks a significant step toward the rising shift to Bitcoin Cash from the classic Bitcoin based on the former’s improved features and functions.

This website joins the list of Bitcoin casino and gambling sites that have already added Bitcoin Cash to their supported payment methods. Some of the notable ones are Games.Bitcoin.com and Betcoin.ag.

Bovada and its BCH payment adoption 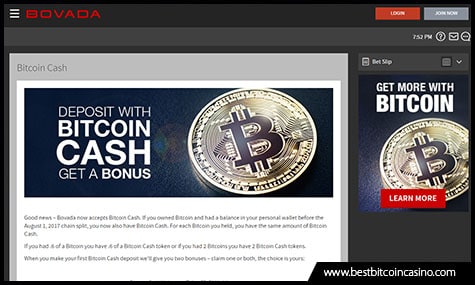 Bovada recognizes the growing interest toward Bitcoin Cash, even making the altcoin that better version of Bitcoin.

It is important to note that there are other Bitcoin variants. The most recent is Bitcoin Gold which was released at the end of October. There was also the planned SegWit2X which was supposed to come out this November but was canceled.

However, operators are embracing Bitcoin Cash more than the other variants. Many are also backing BCH as evident by the value of the cryptocurrency which shot up when the announcement for the cancellation of SegWit2X was released.

Calvin Ayre, owner of Bovada, believes that Bitcoin Cash adheres to the original Bitcoin design as intended by Satoshi Nakamoto. Sharing his sentiment is Roger Ver, a crypto money enthusiast who received the title of Bitcoin Jesus.

BCH payment is also available on two of Bovada’s sister sites: Bodog and Ignition Casino. All three also offer a Bitcoin Cash deposit bonus to encourage players to use the new cryptocurrency.

The 100-percent deposit bonus offers up to $500. Players can use it for sportsbook, horsebook, casino games, and poker room games. This bonus can also be converted to cash by meeting the rollover requirement of five times the bonus in the sportsbook and racebook sections. If the players use the bonus in the casino section, they need to wager about 35 times the bonus amount.

Why use Bitcoin Cash

The reason why many operators are accepting Bitcoin Cash over its variant is its features. Many believe that Bitcoin Cash remains true to the original intention of Bitcoin as stated by its creator, Satoshi Nakamoto.

In contrast, Bitcoin Gold also has the same 1mb block size as Bitcoin, but this altcoin is only intended to decentralize the mining process of Bitcoin by using Equihash. Despite that, Bitcoin Cash still has the upper hand in terms of payment options.

Even if SegwitX2 were to come out, its only benefit is its 2mb block size which is only a quarter of what Bitcoin Cash has to offer.