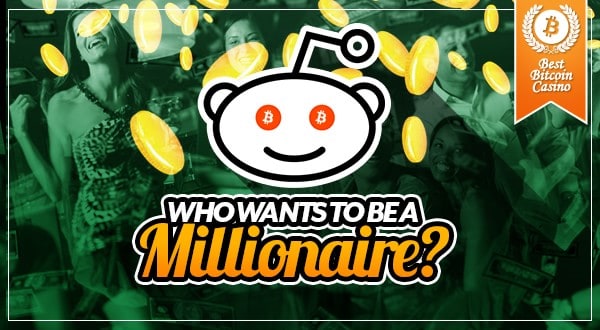 The charm of Bitcoin gambling and of blockchain spread beyond the casino market and into various social platforms that mix crowdfunding and Bitcoin betting.

It’s kind of amazing how fast things can happen on the Internet.  When Bitcoin were introduced back in 2009, only a few websites believed the digital currency would suit online gambling. Now, the industry is filled with Bitcoin casino games hosted on numerous platforms at par with the traditional fiat-run casinos on the web.

A little more than a month ago, a redditor named “Moizme” posted to /r/ShowerThoughts (a community for amusingly off-kilter ideas and curiosities). This time, the contribution went as follows:

“If a million of us picked a certain redditor and all donated just $1, we would have the power to make someone a millionaire”

In the time since then, a community formed around the idea, procedures were laid out, money spent, and an online lottery conducted. The first two winners have already been selected.  The first made about $1000, and the second made more than $11,000—all were raised from small community donations. 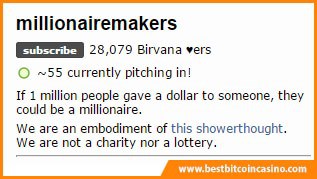 Excitingly, this entire project has only been possible with the aid of cryptocurrencies.  Paypal’s fees are enormous (about 40%) for small transactions like this, and it will freeze accounts at the drop of a hat if you catch them in the wrong mood.  As a result, much of the money being sent has been via changetip, the dogetip, and direct Bitcoin and Dogecoin transactions. The result has (naturally) been pretty much entirely smooth.

One of the key advantages of cryptocurrencies is that, barring price fluctuations, they aren’t surprising.  No organization or person can separate you from your money (or control how you use it) on a whim.

Perhaps even more exciting, though, is that the selection of the winner has also been made provably fair via a creative use of the Bitcoin block chain—a technology the free Bitcoin casino market is built on.

Here’s how it works: once the thread of participants is announced, the bot that officiates the game begins its work. It waits for six blocks to elapse, and then harvests the hash from the sixth block (a value that it is impossible to predict).

This hash is then used to determine which of the participants the winner is.  This is a creative and simple use of the Bitcoin network, and one that serves to emphasize some of the most important value propositions of Bitcoin—namely, its global scope, its verifiability, its incorruptibility, and its transparency.  One can’t argue with the Bitcoin block chain nor falsify it.

Obviously, the MillionaireMakers subreddit has a lot in common with other Bitcoin gambling staples like the lottery. However, its nature as a nonprofit service (and as a community service) gives it a very different atmosphere than a traditional lottery. Moreover, the community seems a lot more fun to get involved with, if you like that sort of thing.

The sense of camaraderie and personal connection to winners has distinct value for how much fun the game is to play.  It’s also a wonderful evangelism tool for Bitcoin, and those interested can check out the /r/MillionaireMakers subreddit to participate.