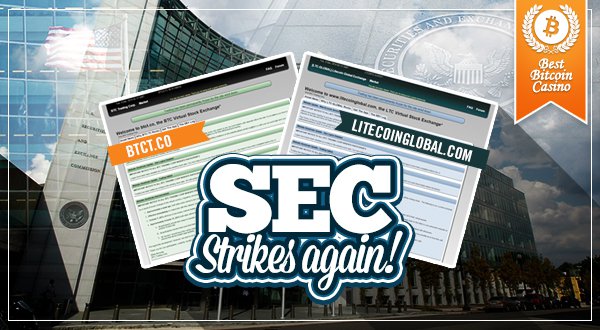 Owner Ethan Burnside received a $68,000 fine from the SEC for the unregistered Bitcoin stock exchanges previously operating as BTCT.co and Litecoin Global.

The US Securities and Exchange Commission (SEC) is in hot pursuit of the violators operating within the Bitcoin markets.

Earlier this year, it imposed a fine on Erik Voorhees for the unregistered Bitcoin IPOs of the popular Bitcoin dice game, SatoshiDice. Now, true to its mission to focus on the legality of the Bitcoin stock exchanges in the country, the SEC released its decision regarding the case of BTC Trading Corp.

Ruling against the company behind the online stock exchanges BTCT.co and Litecoin Global, the SEC imposed a $68,000 fine on BTC Trading Corp’s owner Ethan Burnside.

However, the SEC decision did not happen overnight since this case trails way back to September 2013. Throughout the year-long investigation, Burnside was reported to have been cooperative, expressing his desire to protect the users of his Bitcoin exchange websites.

In fact, BTCT.co and Litecoin Global officially ceased their operations on Oct. 31, 2013 after following a period during which registered users were instructed to withdraw their funds. According to the SEC, about 20,000 BTC and 200,000 LTC were cashed out. Also, both websites discontinued accepting traders and allowing trading operations in preparation for the shutdown.

The resolution of the BTC Trading Corp’s case only shows that the SEC is determined to hunt down any Bitcoin exchange or investment website that violates the rules and regulations in the US.

While it may seem that the Bitcoin casino brands in the market are exempted from this, it should be remembered that several Bitcoin dice platforms and other gambling websites now enable their players to invest in the bankroll. Other aspects should also be considered, because like the case of SatoshiDice, Bitcoin casinos may be put to close with a simple move perceived as illegal by the SEC under the law.