As more Bitcoin ATMs are installed in the US, with the first-ever in San Francisco and more in New Hampshire, convenience awaits US-based Bitcoin casino fans.

San Francisco may only be the fourth most populated city in California, but it is the first in the state to welcome a Bitcoin automated teller machine.

Bitcoin ATMs provide an alternative and convenient means to purchase the digital currency, and they have started to reach more locations across the globe. Some of the US states, which previously never had a Bitcoin machine installed, now host at least one, enabling more people to take notice of this innovation called Bitcoin. With various Bitcoin casinos accepting US players, this is certainly a development the gaming community should follow.

Produced by BitAccess, the first Bitcoin ATM in the city supports two-way operations. This setup is a step ahead of the first generation of machines since users can now either buy Bitcoin using their dollars or purchase real money by selling their Bitcoin.

Located at the Workshop Café in the financial district, the new Bitcoin ATM, however, imposes a transaction limit of 1 BTC. According to reports, though, frequent users will find their transaction limit to decrease over time in the event they fail to provide additional verification. 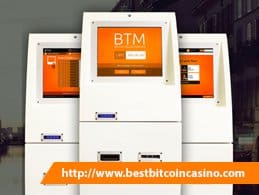 A facial photography and a photo ID scan, for instance, are some of the methods to verify the user account. Opting to provide these should increase the limit and allow for transactions beyond the default value of 1 BTC.

Despite the verification methods that may take a toll on the anonymity in Bitcoin transactions, café owner Rich Menendez could not conceal his excitement over the newly installed Bitcoin ATM, said in an interview:

“…It’s also the first bidirectional bitcoin machine in the US, meaning you can buy and sell bitcoin in this machine. And super excited because it’s just so innovated, so tech forward.

Meanwhile, Bitcoin ATMs will also be in service to the local residents in New Hampshire after the company Bitcoin Brands received the green light from the State of New Hampshire Banking Department to set up the machines.

Bitcoin Brands, which is responsible for installing Bitcoin ATMs in Montreal and Michigan, aims to build a network of Bitcoin vending machines. Its design and product boasts a compact structure, which is the same or at least reminiscent of the Bitcoin teller machines recently launched in a restaurant in Argentina and in a teenage clothing store in Italy.

BitAccess, on the other hand, will have its machines spread out in other key locations in the US through the initiatives of its partner, Zenbox, a Bitcoin machine operator based in the country.

Bitcoin usage in California is now legally accepted; however, engaging in online gambling using the digital currency remains in the gray area. Nevertheless, the increasing number of Bitcoin ATMs in the US signifies the convenience Bitcoin casino enthusiasts will have when funding their Bitcoin wallet or when exchanging their Bitcoin for real money.