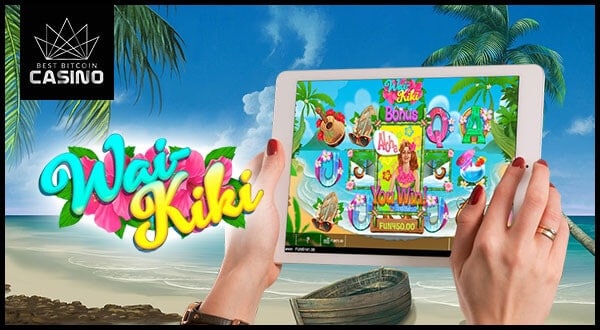 The Waikiki Beach in Honolulu is the setting for this new online video slot. The famous beachfront was once a retreat for Hawaiian royalties, but it is now a hotspot for surfers across the world.

Iron Dog brings the beauty of the famous Hawaiian beach to the players’ screens through Wai-Kiki. The game welcomes players with a view of the tropical beachfront under a bright blue cloudy sky, complete with a wooden surfboard, lush foliage, and the blue sea.

Icons with floral designs—together with symbols one can easily associate with Hawaiian beaches—fill all five of the three-row reels. A simple and mobile-friendly interface completes the screen of Wai-Kiki.

This 25 pay-line slot game offers bettors the chance to become part of Hawaiian royalty with a 96-percent Return to Player rate and a maximum payout of 200,000 coins.

Players can spend the morning by walking on the sandy Waikiki Beach and looking for Wild symbols. A Pink Wild—represented by a pink flower—can appear in any random position after the reels stop spinning. Wilds will substitute all icons except for those needed to unlock the Bonus or Free Spins.

Their Waikiki vacation will not be complete without grabbing a surfboard and riding the waves across the beaches. A Surf symbol—represented by a wooden surfboard together with a pair of sunglasses—can reward as high as 100 coins.

Bettors should look out for turtles, as the reptile’s appearance might be a rewarding experience. If the Wild appears on top of a Turtle symbol—represented by a turtle—the Turtle turns into a Scatter and gives the player 100 coins.

Players will join the local community in luau, a traditional Hawaiian party. Inside the game, the Free Spins Luau will start by flanking the Luau symbol—represented by three flowers with the words Free Spins Luau—with two Hukulele symbols on both sides.

The game, then, awards bettors with 21 free spins for participating in the Luau. The screen transports players into the nighttime Waikiki Beach, adorned by a pair of lit tiki torches. Tiki Token—portrayed by a wooden token engraved with a red flower and the word Tokens—replaces the Cocktail symbol. Both have the same maximum payout of 200 coins.

Each Tiki Token appearing on the reels is collected inside a Tiki Totem. After the duration of free spins, the Totem will pay players according to the number of Tokens collected. They can receive as much as 5,000 coins.

While the Luau is going on, the Surfs and Fishing Hooks change colors to match the night’s festive vibe. However, their payout values stay the same.

And during the night, a Blue Flower Wild—represented by a blue flower—can appear in addition to the Pink Wild. Powered by the moonlight, a Wild can appear anywhere in the reel and spread up to five more slots.