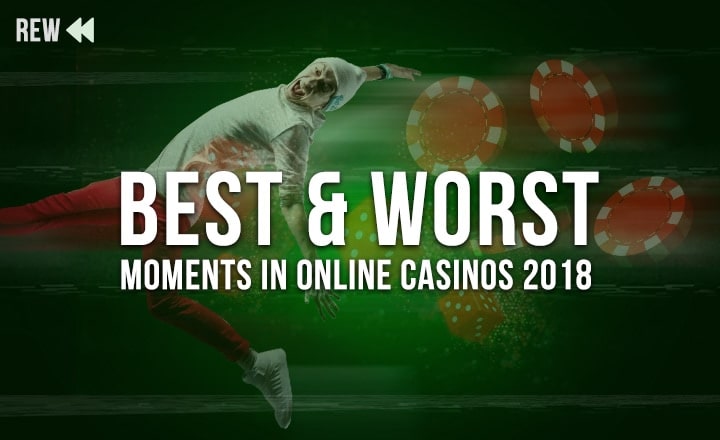 Look back at these best and worst moments that have caused happiness and despair to the online casino and sports betting community this 2018.

The online casino industry had its fair share of bright and dim moments during the past 12 months.

During the year, the entire community celebrated the reversal of a restricting ruling and the impressive showing of many hubs. At the same time, online casino enthusiasts winced as news of hacks, departures, and exits emerged from respectable outlets.

Here are three best and worst moments that happened in the iGaming scene this 2018.

Dice is back online! Thanks for your patience during this period of downtime. Our official statement on the transfer hack that occurred can be found here: https://t.co/BfmiXCRzA7

The reputation of cryptocurrencies in online casinos took a huge hit when EOSBet—one of the largest crypto-exclusive casinos—was hacked in September.

The malicious hacker took advantage of an exploit on EOSBet’s smart contract, in which the suspect was able to gamble without the risk of losing his funds. By playing consequence-free games, the hacker took home 44,427.4302 EOS tokens, worth around US$230,000 around that time.

EOSBet had since patched the involved codes.

The online poker community showed growth throughout the year. Followers of the World Series of Poker (WSOP) can attest to that claim.

The 2018 version and the 49th edition of WSOP in June saw many of its tournament records broken. One of these records is the number of entrants for the $365 WSOP.com Online No-Limit Hold’em event. A total of 2,972 players entered the online poker event—an all-time high—that was won by William Reymond.

Earlier this year, changes to Australian gambling law and the attitude of its regulator forced a number of unlicensed online casino operators to cease operations in the island continent.

Instead of potentially facing a fee of reaching up to more than AU$6 million, internationally licensed gaming hubs—including BetOnline.ag, SportsBetting.ag, and TigerGaming—have instead decided on restricting Aussie bettors from playing on their sites.

Anticipating the influx of sports fans interested in the greatest sporting tournament in the world, iGaming sites offered its customers on June several FIFA World Cup-related bonuses and promotions. This move resulted in an increase in both traffic and income for a number of online casinos and bookmakers.

Portuguese online sportsbooks, in particular, recorded a boost in revenue during the quadrennial soccer competition. A report from the country’s national gambling regulator revealed that online betting sites reported a gross revenue increase of almost €3 million from Q1 2018 to Q2 of the same year.

Two decades after its foundation in 1998, the Mybet Group declared its companies—Mybet Holding SE, ANYBET GmbH, and SWS Service GmbH—insolvent on August 17. Prior to this, the German operator recorded poor financial results in the preceding quarters, which did not help alleviate Mybet of its existing debts that led to its eventual insolvency.

Since then, sportsbook and casino operations remain suspended, with no assurance when the storied gaming hub will return if it will ever go back online.

In what could be considered the biggest development in the online gaming industry this year, the highest court in the United States on May 14 ruled the Professional and Amateur Sports Protection Act (PASPA)—which prohibited betting on sports—unconstitutional. This reversal has brought legal sports betting—and its online counterpart—within the reach of players in many states outside of mainstay Nevada.

Currently, online sportsbooks are now legally allowed to offer wagering options in some states, including New Jersey and Pennsylvania—with more moving their way into legislating sports betting. Many experts anticipate the rise of online bookies next year.