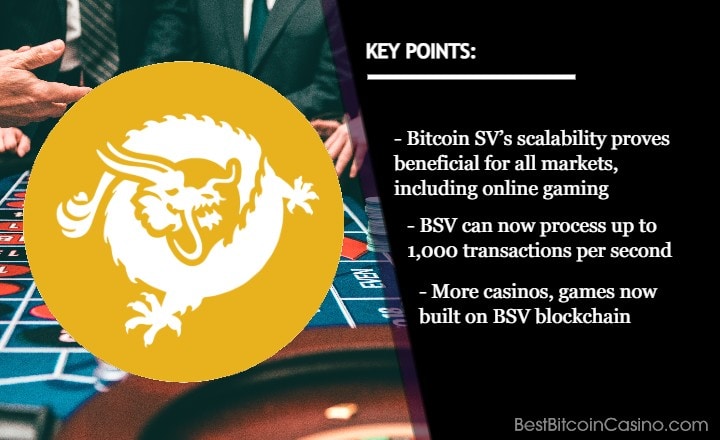 Are you ditching Bitcoin SV? Well, you might want to pause first, think twice, and start exploring the "scaling" world of BSV gaming.

Bitcoin SV brings the true vision of Satoshi Nakamoto’s Bitcoin to the next level, with stability, scalability, security, and safe instant transactions at its core. Bitcoin SV, unlike other cryptocurrencies, is not rooted in itself as the product, albeit it functions as a tool that powers businesses and enterprises.

You may have heard of the word ‘scalability’ ever so often, perhaps most of the time when talking about the main problem with Bitcoin Core. With Bitcoin Core’s inability to scale, Bitcoin SV takes the spotlight. As of March 2021, Bitcoin SV handles up to 1,000 transactions per second, becoming the fastest and most efficient blockchain compared to others. And with efforts to further boost Bitcoin SV’s value, Bitcoin SV is designed to process at least 50,000 transactions per second, making it far ahead of BTC and ETH.

And as more companies adopt the BSV blockchain, more markets will use this technology and reap the benefits One of these is the gaming market.

“An online gaming company can get involved in this platform and start to find pieces that they can put in, and not only make their business run better, not only have value added, but they can also decrease costs and increase security on their platform. And oh yeah, just like it says in the white paper, you can also use it for payments.”

Where can you use BSV for gaming?

BSV gaming is no longer new on the market. But compared to BTC and ETH gaming, it is yet to take the center stage. This, however, is not reflective of Bitcoin SV’s prowess in the gaming sector. In fact, Bitcoin SV offers technologies that enable developers and operators to ensure a strong, future-ready foundation for their products.

Peergame is an online casino built on the BSV blockchain. It offers a series of casino games that you can play using BSV. The games on board–Bitto, Baccarat, Turtle Race, Ladder, Coin Flip, Roulette, Wheel, Dice, and Coin Battles–let you experience provably fair and on-chain gaming. You can connect your Money Button wallet or HandCash wallet to use Bitcoin SV as your bets, and expect to receive your winnings right in your wallet. Other than games, Peergame also gives you the chance to join promotions and win BSV prizes.

“We want to bring CryptoFights to players to see how native tournaments inside of a game with all of the new technology we offer brings such as: All moves are transaction and can thus be studied and analyzed; all matches are stored permanently on the blockchain and can be played back at any time; and eSport players identities can become popular based on how they perform in games. No need to have millions behind you or winning huge tournaments to become known.”

According to Kronoverse, CryptoFights is a competitive mobile-friendly 3D game inspired by Dungeons & Dragons. Now in open beta, the game welcomes you to pick a species, customize it, join tournaments, and win real money.

SatoPlay is a BSV-based casual gaming platform that began operating in 2019. Initially with a few casual mobile browser games, SatoPlay has evolved its portfolio by adding more titles and making its platform available on the Play Store. Its latest game Leap Day Birds even allows players to make add-on purchases using BSV.

Although not an online casino built on the BSV blockchain like Peergame, Betcoin.ag is among the growing number of cryptocurrency casinos that now accept BSV. You can deposit funds to your Betcoin.ag account using BSV and enjoy myriad games from some of the top game providers in the iGaming market. The best part is that using BSV, you can unlock an exciting world full of casino games, as well as get chances to enjoy casino bonus deals and promotions. But other than Betcoin.ag, there are more casinos now that let you enjoy betting on games using BSV.

If you’re interested in getting an updated 2021 list of all Bitcoin casino reviews for this market, check out the casino review section.