Licence: No License Yet 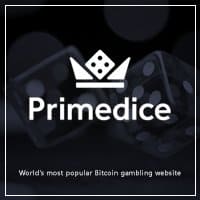 Despite the increasing number of Bitcoin dice platforms, PrimeDice continues to stand out and become one of the top choices of players when it comes to playing online dice games. Launched in 2013, this brand has already undergone several updates and is currently running on its latest version, the PD3. Although announced at the beginning of 2014, it was only unveiled in August. Nevertheless, this major upgrade has added so much more to the already remarkable features, truly making it a name to beat in the industry.

Many Bitcoin dice games may already have a resemblance to its platform, but PrimeDice has worked doubly hard to produce a unique website that caters for the dice betting enthusiasts. In fact, it now features a new service called Dice Duels, where you can play against another player from any part of the world. This is possible by finding in the chat another bettor who is eager to match your wager for a dice roll. With this player vs player concept that registers zero house edge, it looks like this brand is setting a new trend in the Bitcoin casino industry.

Aside from the new game concept, PD3 comes with a new and lower house edge of 0.9% only. Moreover, its provably fair system has been updated, further guaranteeing players that any kind of cheating or manipulation will be prohibited.

The interface of this platform is absolutely top-notch. It is flexible, intuitive, clean, and most of all user-friendly. It also comes with new designs and themes, which may be changed using the provided designs. However, since lavender is the color motif of this platform, all themes are in that shade. It would be more appealing, though, if more colors will become available since not all players may be too drawn to that shade.

Of course, with its jump from PD2 to PD3, users like you now have more abilities. It is now possible to tip, ignore, or private message other users through the improved chat feature. You can also take advantage of the enhanced automatic betting while noticing no lags for every roll of the dice.

PrimeDice 3 may have bumped up its services with new features, but it is still worthy to point out that it retains its competitive affiliate program with the ability for you to cash out profits instantly. There is also an opportunity to receive more bitcoins in the faucet once you have gained more achievements and increase your level. Likewise, a better and faster customer support system is now available.

It is certain that PrimeDice went all out with its latest offerings, and this is a much-welcomed development in the Bitcoin casino industry. However, existing PD2 users must be advised that a new account is necessary. This platform will ensure, though, that the previously chosen names will not be used by other players. With this, this Bitcoin dice website is definitely headed toward the right direction.